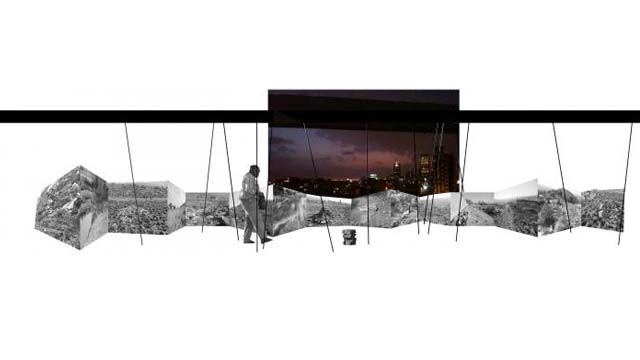 The Koppies seem to be a backspace in the city, little hills in the urban plain, literally little heads. A lot happens there between informal, elusive – sleep, rubbishes, sex, murders (see the Marikana events)… , and public – run, dogs walk, picnic, pray… They are a space to breathe – rules seem more flexible -, a mix of landscape and urban space, a park and an abandoned area. But in Jo’burg, the backspace is often the front space. Public space is often private and vice versa; for instance the rooftops are often more appropriated as ‘common space’ than the streets. Staircases look like a packed street when the street is empty, or full of fences. These questions of public sphere, for who, are intensively at work there.

Where is the common in such a city ? Where can I lay down? Where an I walk?

The installation (first version, to be developped) is a series of large scale pictures on cardboard, installed in various places in the city space. Two levels of vision : one sitting on bricks (like the way people unpave the parks and pile them up to create seats), and see the pictures; one standing, and see the skyline or the city.

During the Play>Urban residency 2012 the idea was to install them on the rooftop of King Kong building, which finally was not possible. We finally exhibited them in the stair going to the rooftop.