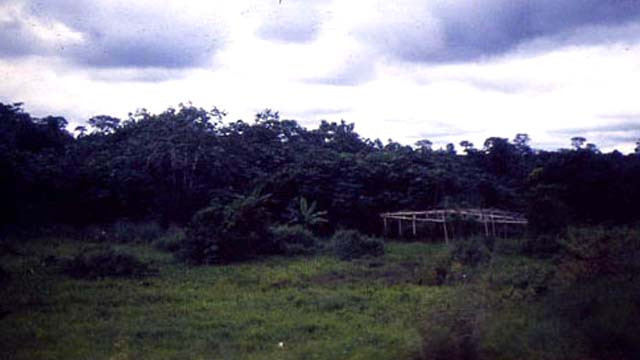 Initiated by Barbara Bouley / cie Un Excursus. This project gathered, from 1999 to 2001, 30 artists from Cameroon and around, in Douala, for workshops on theater, (in co-realisation with Doual’art in 1999). A second series of workshops took place in 2000 in Bonendalé (a village nearby Douala), at Joel Mpah Doh’s place (painter and artist). 2 months of reharsals and the finalization of the theater with the Cercle Kapsiki artists (Blaise Bang, Salifou Lindou, Hervé Yamguen, Hervé Youmbi, Jules Wokam) & Manu Duro (French Guyana)- technical direction: Michel Violeau & team. The theater and performances went on tour in Douala, Yaoundé, and in France (Culture Commune-Loos en Gohelle, Collectif 12-Mantes la Jolie, Laboratoires d’Aubervilliers).

One of the main stakes was to invent a structure connected to the realities of the Cameroonian context, especially in terms of technics, and also to question what can be a contemporary theater in a country where the frontal stage has almost no history – except in link with the colonial context. The theater is inspired by the structure of wooden houses, and the assemblages by mourning tents. The project is also influenced by Egyptian tents. The all structure enters in a container.

In december 05, the theater was transmitted to the Cameroonian artists who participated the process and its conception, Joel Mpah Doh and Cercle Kapsiki. Since that time, different projects have been developed by artists living and working in the village of Bonendalé, especially a hip hop festival.

A roundtable about itinerant structures for Scenes Urbaines.