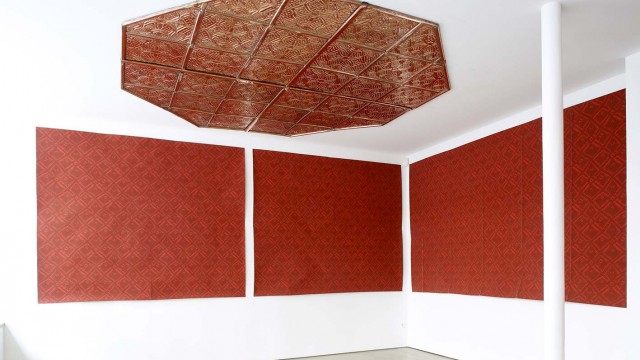 802. That is where, as you heard, the elephant danced the malinga. The place where they now grow flowers // Sammy Baloji

802. That is where, as you heard, the elephant danced the malinga. The place where they now grow flowers.

An exhibition by Sammy Baloji at Galerie Imane Farès – Paris.

This installation for the Galerie Imane Fares is a re-reading of a classical salon bourgeois. Two elements are particularly re-designed, the wall paper and the ceiling decoration [two octagons in copper – reference to american or south african metalic molded ceilings]. Both are ‘customised’ with a pattern which is in fact the repetition of a body scarification, from a photo made at the beginning of the 20th century. The exhibited photos of bodies are themselves re-scarified. A series of carved shells is also exhibited with congolese plants in them.

The copper elements were produced by the Atelier Eric Van Hove in Marrakech.