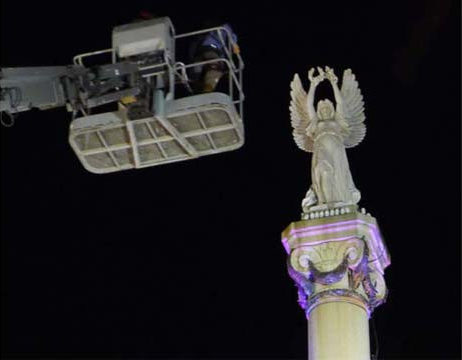 A project with François Duconseille (ScU2)

By Night is a one night event organized by Courants d’Art (Nathalie Gonthier), the 14th of september 2013 downtown St Denis de la Réunion.

This project (quoting Daniel Buren) questions the relation people have with history and particularly with public monuments – here related to the first world war. The project is to shift the spatial relation we usually have with a statue, in general vertical and far up, to an horizontal relation of proximity. The first idea was to build a stair in front of the angel which is at the top of the column in the middle of the main street next to the St Denis de la Réunion city hall, but it was impossible technically. So the idea came of a cherry picker. During the all event anyone could go and see the angel.