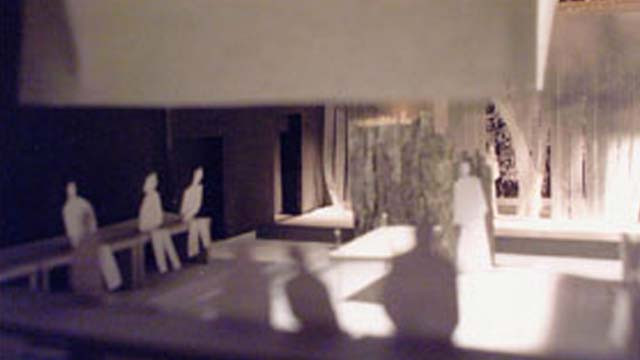 2 didactic texts by Brecht. The audience enters backstage; seats (tri-frontal) are apparently very different but in fact they refer to social positions. The stage is made with multiple axis of vision in a space apparently simple, allowing the idea of a journey. For instance, two pieces of white plastic are suspended laterally; they become at some point backdrops for a little lateral stage, with a frontlight made with two fluos on the floor. The main backdrop is a translucent plastic cutted in strips (like in industrial places), and behind it there is a large black and white monotype made of wooden prints, which is appearing clearly only at the end of the performance, when at the last moment the actors are making the plastic fall down. The performance ends on that vision.

This is also during that project that I’ve been working for the first time on suspended « mobiles », reframing the proportions of the space; what I’m calling « rebuilding a theater ».