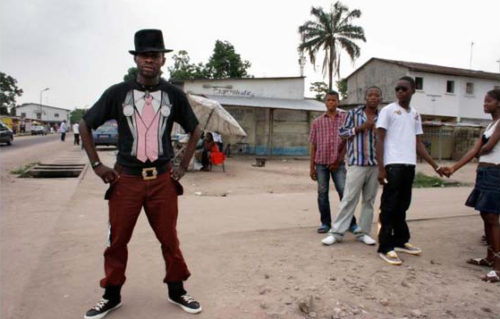 This project wouldn’t have been made possible without a long term companionship with friends and artists living in Kinshasa: Djanga Weni, Androa Mindre Kolo, Ken’s Mukendi, Vieux Daouda, Dicoco Bokhetsu, and many others including the ‘sapeurs’.

I have been working in Kinshasa, DRC since 2001. Early on, there, I encountered sape. There are many ways to describe sape. Few, however, can effectively capture its intense complexity and none can claim to « explain » it.  It is far too rich and shifting a phenomenon for such.  Broadly, then – and of necessity too broadly – a definition:  what I speak of here is a set of practices involving young men and women that revolves around intersections between street fashion, haute couture, performance and « dressing up ».  Sape is the art of dressing to kill.  Continue here  the text on the project.

2008 // Installation in Johannesburg at the Drill Hall, in Yeoville and in The Zone.

Publication in African Cities Reader 1 by Chimurenga and Africa Centre for Cities / Capetown.

Exhibition at the Museum of Contemporary Art, Warsaw, feb 2015 there.