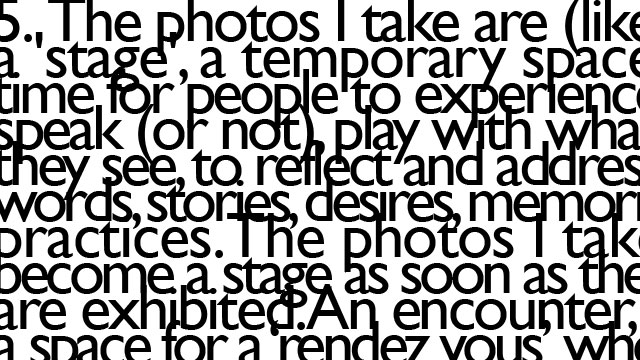 Author:Jean Christophe Lanquetin
Category:Photo projects, Published texts / Press
← From the back // A research
The Sape project in ‘Lest the two seas meet …’ / Contemporary art museum, Warshaw →

1. My photographic works are mostly on contemporary cities as a major ongoing banal ‘theater of operations’ over the world. I particularly focus on the production of the ‘common’, a battlefield between the massive dynamics of urbanization driven mostly by  authoritarian ultra liberal mechanisms, and the multiplicity and singularity of horizontal practices by people in the ordinary city. Between privatization, segregation and the multiple ways peoples occupy, convert, live in, experiment – small experimentations – city spaces.

2. The ‘common’ here is of course the common spaces but in a larger way, what do people share in contemporary cities. « By ‘the common’ we mean, first of all, the common wealth of the material world – the air, the water, the fruits of the soil, and all nature’s bounty – which in classic European political texts is often claimed to be the inheritance of humanity as a whole, to be shared together. We consider the common also and more significantly those results of social production that are necessary for social interaction and further production, such as knowledges, languages, codes, informations, affects, and so forth. This notion of the common does not position humanity separate from nature, as either its exploiter or its custodian, but focuses rather on the practices of interaction, care, and cohabitation in a common world, promoting the beneficial and limiting the detrimental forms of the common. In the era of globalization, issues of the maintenance, production, and distribution of the common in both these sense and in both ecological and socioeconomic frameworks become increasingly central« . Toni Negri, Michael Hardt, Commonwealth, Preface.

3. The series are like questions. While I travel in various places over the world I see things, and they become series of pictures. The ‘common’ world in which we all live is a clear scale in my work. Each series is like a question mark on how ‘urban works’ gets done. My intention is to pin, to wonder, not to judge. It goes also into a dimension of fiction. And of course, it relates to my own subjectivity.

4. I always felt embarrassed with the fact of taking pictures of people. I no longer take pictures of people’s face if they don’t agree on it. I don’t know where it takes me conceptually but the dimension of a camera as a ‘gun’, is maybe one of the reasons why I began late to process in photography. I focus on empty spaces/places. If people are in the picture, they are far, or from behind. Or they clearly agree. In the Belleville project I decided to put a white circle on people’s face. These questions are really in process at the moment.

5. The photos I take are (like) a ‘stage’, a temporary space/time for people to experience, speak (or not), play with what they see, to reflect and address words, stories, desires, memories, practices. The photos I take become a stage as soon as they are exhibited. An encounter, a space for a ‘rendez vous’ whose effects are not necessarily the one I expect – a space for dissensus and relation -. The photos open a latent space. An event. It is of importance photo installations to be exhibited in the urban spaces – contexts – where I took them.