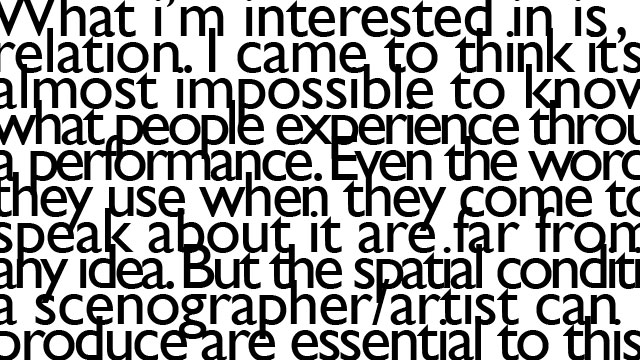 What could be a contemporary concept of scenography?

What i’m interested in is relation. I came to think it’s almost impossible to know what people experience through/during a performance. Even the words they use when they come to speak about it can be far from any idea. Even if the audience’s experience remains inaccessible as linked to each singular person, the spatial conditions a scenographer/artist create for a performance are essential to such an experience. In this approach, the western tradition of theatrical space becomes cumbersome. We have constantly to adapt to a place which is already framing the terms of the relation between the audience as a group and the stage. And in a remaining and powerful way. I often think the fight is unequal (which appears in some projects); but acknowledging what appears in terms of performative practices over the world and questioning the evidences of an established tradition is a way to open a space (particularly for theater); this requires to articulate a theoretical process with practice.

In my experience, scenography is not only a continuation of the western theatrical tradition of stage and it’s rules, including the distant relation to an audience in the frame of the classical viewer’s dispositif and the persistence of the decor. Scenography is a matter of space for fiction in a larger way – maybe just a space emphasizing fiction: from optic to haptic, from spectacular to invisible, with or without ‘cutting’ (découpage) – how to define/build a stage?-, from theater to theatricality. And particularly what about representation in a practice which is highly representational, but where the question of deconstructing the dispositif of representation is constantly and strongly on the table.

The point of tension, of questions, in my work refers to and includes the theatrical tradition I come from, but in a dialogic approach. A core point is not the body of the performer but the body of the audience (individual, collective?). The political is the work on the position and conditions of an audience point of view/experience in a space, a context, a place – often urban, in my practice; and of course the way the performers (actors, dancers, artists…) – the performance at large – build a relation with the people experiencing it whether they came specifically for it or they are passers by in a street. In my work I particularly focus on the imbalance of power – the authoritarian dimension in the history of spectatorship – and on what I could call an emancipating dimension, a spatial research on the possibility of a performative experience which is not framing what you (must) see, which is giving anyone the possibility to choose a way to experience.

Shifting in such a way the notion of scenography is related to a large body of practice, encounters, experimentations and to the fact I work extensively in non western countries where contemporary artists and performers deal with this notion of stage – they often don’t feel comfortable with it-, theater and performative arts in a larger way, unpack it. They don’t necessarily focus on the tradition of scenography. Or just as one aspect, among others.